International Conference on Inter Disciplinary Research in Engineering and Technology 2016 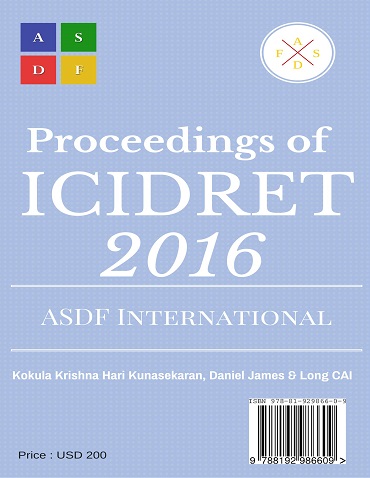 For seismic design of building structures, the conventional method, i.e., strengthening the stiffness, strength, and ductility of the structures, has been commonly used for a long time. Therefore, the dimensions of structural members and the consumption of material are expected to be increased, which leads to higher cost of the buildings as well as larger seismic responses due to larger stiffness of the structures. Thus, the efficiency of the traditional method is constrained. To overcome these disadvantages associated with the traditional method, many vibration-control measures, called structural control, have been studied over recent years. Structural Control is a diverse field of study. Structural Control is the one of the areas of current research aims to reduce structural vibrations during loading such as earthquakes and strong winds. In terms of different vibration absorption methods, structural control can be classified into active control, passive control, hybrid control, semi-active control and so on. The passive control is more studied and applied to the existing buildings than the others. Base isolation is a passive vibration control system that does not require any external power source for its operation and utilizes the motion of the structure to develop the control forces. Performance of base isolated buildings in different parts of the world during earthquakes in the recent past established that the base isolation technology is a viable alternative to conventional earthquake-resistant design of medium-rise buildings. The application of this technology may keep the building to remain essentially elastic and thus ensure safety during large earthquakes. Since a base-isolated structure has fundamental frequency lower than both its fixed base frequency and the dominant frequencies of ground motion, the first mode of vibration of isolated structure involves deformation only in the isolation system whereas superstructure remains almost rigid. In this way, the isolation becomes an attractive approach where protection of expensive sensitive equipment and internal non-structural components is needed. It was of interest to check the difference between the responses of a fixed-base building frame and the isolated-base building frame under seismic loading. This was the primary motivation of the present study.

Akil Ahmed. "Background Study of Base Isolated Structure and Analysis of Base Isolated Frame." International Conference on Inter Disciplinary Research in Engineering and Technology (2016): 95-100. Print.